NIÁGARA — A Pan-American Story was commissioned for the TORONTO 2015 arts and culture festival PANAMANIA, presented by CIBC, and is inspired by PANAMANIA TO2015's theme of 'Aquaculture', celebrating the culminating year of the United Nations International Decade for Action - "Water for Life".

TRUE STORY!
In 1824 José María Heredia, a twenty-year old poet and revolutionary was exiled, forcing him to escape for his life from his native Cuba. A man of astonishing courage, not only did Heredia join a Secret Society for freedom from Spanish rule – demand the abolition of slavery – decry the Conquistadors' genocide of Cuba's Aboriginal peoples – but he was also an environmentalist!

Written on the edge of an enormous precipice on the Canadian side of the Falls, José María Heredia wrote a cathartic poem which immediately immortalized him as "The First Poet of the Americas" – indeed, the father of Romantic poetry in the Spanish language. It is studied and cherished to this day by every Cuban and generations of Latin Americans, who (along with the rest of the world), are compelled to visit Niagara Falls as a first stop in North America - taking on an almost cultural pilgrimage! For Canadians – while there is a plaque to Heredia at Table Rock – this cherished Cuban connection is a little known fact!

NIÁGARA — A Pan-American Story is a live experience, fusing dramatic text with a cast of 2 actors; onstage musicians; and a wealth of original Cuban music with its unique African, Spanish and Aboriginal roots. The script is in English and Spanish – (the predominant languages of the Pan Americas) – and José María Heredia's story will flash-back and flash-forward, in many vocabularies – exploring song, movement, film/video and audio/visual technology. Niagara Falls in Heredia's time was a gargantuan force of nature, far more wild, crashing and overpowering than today's remnants (which, even so, draws 12 million visitors a year). José María himself will come alive; he spoke of "danger and awe", and described how the very rock where he'd sat, hurtled into the chasm as he rose to leave. In the poem's last line he also predicted that he would die "in a few years", and hoped some "kind traveller" might one day look upon Niagara and think of him! The extraordinary truth is that both came to pass! Heredia died in poverty of tuberculosis in Mexico at the age of 35.

His poem is cherished to this day. 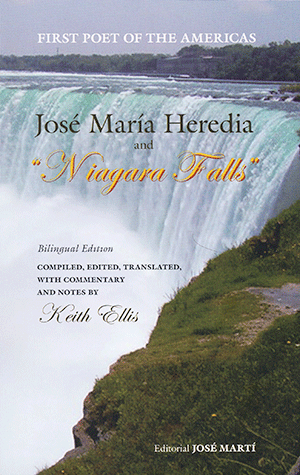 "It is a pleasure to honour José María Heredia today, as we remember the remarkable poem "Niágara," which he composed in 1824, at the astonishing age of 20, while in exile from Cuba.

Niagara Falls is both a national landmark for Canadians and a literary landmark for our writers. It touches us that a poet so distant from us both in space and time would have come here and seen a symbol for so many of the emotions he was expressing at that time. We share with the Cuban people their admiration for this fine poet and hope that, through the dedication of this plaque to his memory, his work will become better known among us."


Give me, give me my lyre, for I feel
In my aroused and trembling soul
The flame of inspiration! Oh, how much time
Has gone by in darkness, my brow deprived
Of the gleam of its light!... Surging Niagara,
Your sublime face alone can return to me
The divine gift that sorrow with impious hand
Cruelly snatched from me.

Oh mighty torrent, be calm and silence
Your terrifying thunder: lighten
The mists that whirl about you,
Let me behold your serene face,
And fill my soul with ardent fervor.
I am your worthy contemplator: always
Disdaining life’s common and petty cares,
I yearned for the exceptional and the sublime.
The furious hurricane unleashed,
Or the thunderbolt booming over my head,
My heart raced with joy: I saw the ocean
Lashed by stormy southern winds,
Rage against my ship and open
Chasms before me, and I loved the danger,
The fury I loved: but all that fierceness
Did not move my soul
As deeply as does your grandeur.

You flow serene, majestic, and then
Crashing onto sharp rugged rocks,
Violently you dash forward, relentless,
Like destiny, irresistible and blind.
What human voice could describe
The terrifying spectacle
Of these roaring rapids? My soul is lost in vague thoughts,
Contemplating the seething current,
Which my perturbed vision vainly
Tries to follow to the broad edge
Of the towering precipice: a thousand waves
Swift as thoughts pass,
Clashing in wild fury,
Another thousand, and yet another rush to join them,
And amid foam and clamor they disappear.

But still they come.... they leap.... The horrendous abyss
Devours the plunging torrents:
A thousand rainbows crisscross there,
And the mighty roar resounds in deafened forests.
Hitting the rocks with terrifying violence
The water breaks, and leaps,
And a cloud of swirling vapors
Covers the abyss in whirlwinds, it rises,
Circles about, then like a huge pyramid
Reaches toward the heavens,
And drifting over the surrounding forests
Frightens the solitary hunter.

But, what does my eager gaze,
Restless, forlorn, search for in you?
Why don’t I see, encircling your immense chasm,
The palm trees, ah! Those delicious palm trees
That on the plains of my beloved Cuba
Come to life blessed by the sun’s smile, and flourish,
And in the waft of ocean breezes
Sway under a sky of spotless blue?

What sorrow this memory brings me...
Oh Niagara! your destiny is fulfilled,
No crown but the wild pine
More befits your terrible majesty.
Let the palm tree, myrtle and delicate rose
Inspire easy pleasures and soft idleness
In giddy gardens: fate held for you
A more worthy and lofty end.
Free, generous, strong spirits approach,
Observe you, and are amazed;
Henceforth they spurn frivolous delights
And feel uplifted when they mention your name.

God, God of Truth! In other climes
I saw lying philosophers who dared
To question your mysteries, offend you,
And fiendishly drag
Miserable men down to lamentable depths.
That’s why my mind, always searching for you
In heightened solitude, is now
In full communion with you: it feels your hand
In this immensity that surrounds me,
And your profound voice touches my heart
In the eternal thunder of these cascading waters.

Amazing torrent!
How the sight of you confounds my spirit,
Filling me with terror and wonder!
Where is your beginning? Who has been nourishing
Your inexhaustible source as the centuries go by?
What powerful hand
Has ordained that on receiving your mighty waters
The ocean does not inundate the earth?

The Lord opened his almighty hand,
He covered your face with restless clouds,
He gave his voice to your tumbling waters,
And adorned with his rainbow your fearsome forehead.
I look at your waters tirelessly flowing
Like the long torrent of centuries
Rolling along into eternity: thus man’s
Flowery days go fleetingly by
And he awakens to sorrow.... Oh! I feel my youth
Burnt out, my face withered,
And the profound pain that shakes me
Wrinkles with sorrow my clouded brow.

Never have I felt as deeply as today
My wretched isolation, my abandonment,
My anguished lovelessness.... How could
A passionate and tempestuous soul
Be happy without love?... Oh! If only a beautiful woman
Worthy of me would love me,
And share my wandering thoughts
And my lonely steps
At the edge of this churning abyss.
How I would enjoy seeing a faint paleness
Temper her face, more beautiful
In her sweet terror, and see her smile
As I hold her in my loving arms!...
Vain raving!... Oh! I am banished,
Without homeland, without love,
With no prospects but tears and sorrow.

Powerful Niagara!
Hear my final words: in a few years
A cold tomb will have swallowed up
Your feeble singer. May my verses share
Your immortal glory! May a kind
Traveler on contemplating your face
One day sigh, remembering me.
May I, with the setting sun,
Fly joyfully to the Creator’s call,
And on hearing the echoes of my fame,
Lift my radiant head above the clouds.


Keith Ellis, whose knowledge of Heredia has provided a deepened understanding of the poet and his poem “Niágara,” is Professor Emeritus, University of Toronto. He has published several books of translations from Spanish to English: the poetry of José María Heredia, of José Martí, an anthology of Salvadoran poetry, and several books of Nicolás Guillén's poetry. His translations of Latin American and Caribbean poets have appeared in many journals, and his translation into Spanish of Derek Walcott's play, The Joker of Seville, has recently been published in Madrid. He has written many books dealing with Latin American and Caribbean literature and culture and is Doctor Honoris Causa from the University of Havana where he is Professor of Merit. His books have won him such prizes as the following: that of the Canadian Association of Hispanists, the Andrés Bello Medal from Venezuela and the Dulce María Loynaz Prize from Cuba. He has also been awarded by Cuba the Distinction for National Culture. The Government of Jamaica has honoured him with the Order of Distinction (Commander Class). He has been a Fellow of the Royal Society of Canada since 1989.


PROPELLER ARTS PROJECTS would like to acknowledge the gracious subsidy provided by Artscape for Daniels Spectrum, the official venue of NIÁGARA — A Pan-American Story.